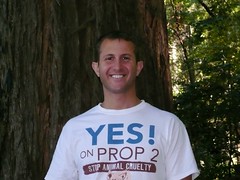 I asked Paul Shapiro, Senior Director of HSUS’ Factory Farming Campaign, to write a guest post for Vegan.com, summing up the movement’s victories on behalf of farmed animals in 2009. His response:

The U.S. farm animal protection movement had quite a year in 2009. In the wake of last year’s Prop 2 passage in California, Maine followed up with a ban on veal crates and gestation crates. Michigan did the same, while also banning battery cages—a move that will reduce the suffering of millions of hens, pigs, and calves. As well, California—the nation’s largest dairy state—became the first state to ban the routine tail-docking of cows, and in fact, the first state to ban any standard factory farming mutilation.

Such progress in one year alone is certainly worth celebrating.

We’ve made unprecedented progress. At the beginning of this decade, zero state laws specifically prohibited any standard factory farming practice, no matter how abusive. Today, seven laws phase out certain confinement systems, one law phases out force-feeding for foie gras, and another prohibits tail-docking of cows. These nine new public policies represent a real change in the farm animal landscape. The era in which factory farmers had no restraint on how unmercifully they could treat farm animals is slowly beginning to end.

However, there’s certainly a long way to go. Even with the meaningful progress made in recent years, we can’t ignore the reality that in this
country, billions of farm animals are still raised and slaughtered, often in ways that would shock most people.

But the recent advancements—which are dramatic relative to the decades prior to this one—offer reason for great optimism that quite frankly didn’t seem realistic just ten years ago. Farm animal protection is finally on the map in the United States, and we can all agree that it’s about time.

Paul’s one of the busiest people in the animal protection movement, so big thanks to him for devoting many hours of his time this past year to Vegan.com. Both through the podcasts we’ve done together, and through our frequent email correspondence, Paul’s unstinting generosity dramatically improved what I was able to offer here throughout 2009.

Copyright © 2008-2020 Mocana Productions, Inc. All rights reserved. Made with ♥ by Cloudnames

You can subscribe to our newsletter by entering your email below!

You can subscribe to our newsletter by entering your email below!